Last night about the time CNN was declaring Barack Obama the next President of the United States, my 4 year-old Toshiba DLP TV decided to celebrate with some fireworks of its own. With a loud “pop” the screen went black but the status lights on the front panel were speaking to me in some dot-dot-dot dash-dash-dash dot-dot-dot sequence. A power cycle continued the light show from the front panel, so I had to resort to watching the election returns via the CNN Election Central website. 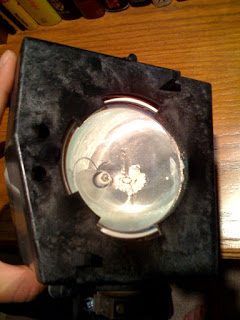 According the the Toshiba owner’s manual I dug out of my filing cabinet, the projection lamp had expired. Much to my dismay, an affordable solution was found on the web – so, no new Plasma for me this Christmas. 😦
A quick search found DLP Lamps.com where I found the part I needed and placed my order. (I used Google Checkout for the first time and actually saved $5.00.) Some basic reseach found that this online retailer had excellent reviews and quick shipping. I’ll likely agree with those reviews, since I already have a UPS tracking number and the package is expected to arrive in a couple days.
So for now I’ll have to use my Slingbox via a computer to watch TV, though I’m already missing the big screen. (Photo shows the graphic remains of the broken lamp.)

View all posts by Marty Bird